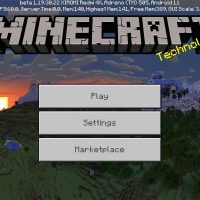 Download Minecraft PE 1.19.30.22 with a working Xbox Live: use the Experimental Spectator mode to watch the gameplay.

Every update of the favorite game is eagerly awaited by users. It is all about the appearance of various new features, functions, or even creatures. In Minecraft PE 1.19.30.22, the developers have changed some aspects of the game, making them even more interesting and exciting.

Also, the changes will help to match the Java Edition even more. For example, this will affect Hoglins and Zoglins and their hit range and hitbox size, which have been modified for this.

It is no secret that currently, many video recordings show the gameplay. Naturally, this is just a record and users see what has already happened. A completely different possibility is offered by the developers, this is the viewer mode.

In it, the heroes have the opportunity to be directly on the field, but at the same time not have any opportunity to influence what is happening. In Minecraft 1.19.30.22, this feature has undergone some changes.

For example, if the parrot jumps off the shoulder of the player if he switches to this mode. Also, animals will not follow such an observer or try to ride him. Enchantments will also not work on such heroes.

Many creatures have appeared in the cubic world for so long, so it seems that they have always been there. Developers are constantly working to ensure that their interaction with the player is as organic and correct as possible.

In Minecraft PE 1.19.30.22, a crash that was previously observed with spawn eggs has been fixed. The behavior of the Traveling Merchant has also been changed so that he cannot appear in lava, water, or underground. This will help it fully comply with the Java Edition.

The changes also affected the mechanics of the behavior of unemployed zombie residents, who from now on will not be able to drive a trolley or a boat.