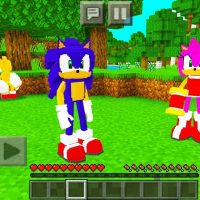 Download the Sonic mod for Minecraft PE: a lot of new mobs in addition to a flying ship you can mount.

Sonic the Hedgehog is one of the most well-known and popular characters in modern media. He first appeared thirty years ago but got widespread thanks to multiple iconical games.

Many Minecraft PE users are big fans of Sonic, which explains why there are so many epic and unique modifications related to this superhero animal.

Most of them introduce Sonic and his friends, but many also add new hostile mobs to kill and Doctor Eggman to stop.

Generally, MCPE will get more interesting and exciting to explore. New characters will add some charm to the Overworld, making it more vibrant.

This Minecraft PE addon does not replace any of the already existing mobs but adds new ones. Sonic is the most intriguing one since he is super fast and deadly.

This perilous hedgehog can eliminate all hostile mobs in no time. Fascinating speed and enormous damage will make Sonic the best companion you’ve ever had in MCPE.

However, you cannot tame or make him follow you since he’s intelligent enough to decide what he should do.
Besides, he is a friendly creature, denoting Sonic won’t attack you even if you hit him accidentally. He spawns in all

Overworld biomes during the day, making him relatively easy to find in Minecraft PE.

On the other side, when there’s a hero, there’s a villain. Sonic is no exception: Doctor Eggman is his most outrageous enemy.

This off-driven scientist has become so powerful he decided to conquer the island where Sonic lived. Nevertheless, you and your friend will not allow this to happen in MCPE.

This vicious and full of evil doctor flies on a spaceship you can use once he’s slain. This transport is rapid and will deliver you anywhere you want to go in no time.

However, you must first get rid of Doctor Eggman.