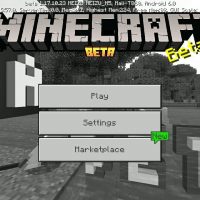 Download the free version of Minecraft PE 1.17.10.23 with a working Xbox Live and play with a cute amphibian, mine deep slate, create candles to illuminate buildings.

For example, in the technical component of the game, the characteristics of the heroes have been improved. The developers have done an impressive job to improve performance and stability.

These peaceful creatures, axolotls, in Minecraft 1.17.10.23 are found exclusively in water. If the character is pulled out of the water, then he will immediately take fatal damage and disappear. Sometimes the user is in danger in the face of huge crowds of drowned and guards. In this case, cute axolotls will come to your aid.

The mobs will try to protect the players and keep Steve from all enemy attacks. In addition, in Minecraft Bedrock 1.17.10.23, axolotls can use the regenerating effect and relieve fatigue.

Glowing lichens can be found in the caves of Minecraft PE 1.17.10.23. The plant is very noticeable as a bright glow emanates from its vines. Lichen can be attached to blocks from all sides instead of roots, sides, and tops.

Using bone meal will help spread the lichen to an adjacent block. Especially on objects such as earth and sand. To get the plant into inventory, you need to use one tool, or rather scissors.

One of the items that appeared in the recent version of Minecraft Bedrock Edition 1.17.10.23. Currently, there are several options for candles, most often they are colored.

It is worth noting that an object can only change color from natural dyes: ink bags and flowers.
The player can use a candle as an alternative light source.