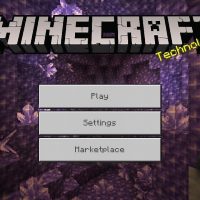 This time, the release pleased the players with an improved generation system. In Minecraft 1.17.41, the developers added as many as two innovations that helped transform the overall look of the map. First, users should familiarize themselves with the Render Dragon graphics engine. This is a special editor, thanks to which all images will appear better and better quality.

In addition, the engine greatly transforms textures. All new items work correctly and fully comply with the Java version. Secondly, the so-called multi-noise world appeared. A new kind of generation, in which all biomes will have a separate site and not a common field. This is very convenient because, in Minecraft 1.17.41, all locations will not merge, forming clear boundaries.

One of the exciting innovations in Minecraft 1.17.41 is Stony Peaks. This is a location consisting of high mountains. There is a lot of stone and gravel on them.

Attractive ores also appeared in Minecraft 1.17.41. These include copper. The resource is generated around the world at the same frequency as a regular iron.

However, the texture of the ore is entirely different. Bright grains of a golden hue are visible on the block. After mining the shards, the player can get quality ingots. Use them to craft other things: a telescope and a lightning rod.

The model of the subject is tiny. Therefore, it does not require a lot of space to place it. In Minecraft 1.17.41, a lightning rod will be helpful if a strong thunderstorm hits your house.

The lightning rod absorbs all the electricity, leaving the player’s building intact. It should be noted that the device will not work underwater or near water bodies.

Crystals of incredible beauty, which in Minecraft 1.17.41, are generated in only one biome. The location is called almost the same – amethyst geodes. Many valuables are kept inside, including bright pink stones.