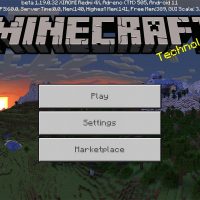 Download Minecraft PE 1.19.0.32 The Wild Update with a working Xbox Live: explore all the possibilities of the new spectator mode or go on a journey through mangroves.

The developers of Mojang Studios have made some adjustments to the work of the new viewer mode, which in Minecraft PE 1.19.0.32 is still in test mode and can be greatly changed.

Fixed crashes that occurred when mobs could get stuck in hatches.

Quite recently, a new biome appeared and immediately received a lot of fans in the cubic world. Mangroves are a very mysterious and completely unexplored place that attracts more and more Minecraft 1.19.0.32 users.

In this update, the developers, of course, could not ignore and fixed some points in this location. For example, now bees can pollinate cuttings of shoots here. And this, as everyone knows, always accelerates the growth of plants.

Also, from the trees that grow in this area, users can make boards. It is also worth considering that the roots of mangrove trees are easily ignited, but they can no longer be used in the furnace as fuel.

This is a new mode in Minecraft PE 1.19.0.32 and working on it is not finished yet. The developers of Mojang Studios even note that the function may change a lot in the future.

But as it became clear, the spectator mode is already available to users. At the same time, the player who is in it will not be able to influence the gameplay in any way. Such a player will not be able to attack, build, throw or use items, as well as open inventory.

The creators did not forget about the inhabitants of the Lower World in Minecraft 1.19.0.32. Piglins, endermen, and skeletons that are in this dimension are now more likely to be met by heroes since the range of illumination levels in which they can appear has been increased.

Favorite of everyone and such a harmless mob Allay also did not go unnoticed. He will not stop when he is on a leash due to the fact that the object is too far away.