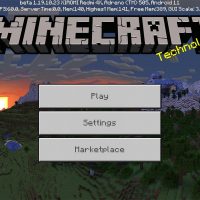 Download Minecraft PE 1.19.10.23 Wild Update with a working Xbox Live: be careful with the Sculk Shrieker blocks, they can summon Warden.

In the new update, the developers of Mojang Studios not only fixed a lot of bugs but also added new features.

In Minecraft PE 1.19.10.23, the spectator mode becomes available to players, in which users can watch the game, and be a participant in it, but not influence the process in any way.

This block in Minecraft 1.19.10.23 can be extremely dangerous for the player, the fact is that if he steps on it, it makes a very strong sound. By the way, it also imposes the effect of darkness on the hero for 30 seconds.

Since Warden uses vibrations to find his victims, Sculk Shrieker can summon this monster. Also, now he remembers information about all the vibrations to which the reaction occurred.

More recently, these blocks have appeared in the game, but players have already appreciated their capabilities. The fact is that they can pick up various sounds and then reproduce the signal of the red stone.

This will be very useful when creating various mechanisms and other useful devices. In Minecraft PE 1.19.10.23 Wild Update, the Sculk Sensor will save vibration data that was previously reacted to during saving or loading.

Developers are expanding the detection capabilities for these items. For example, they can feel vibrations if a player drinks milk or moves in the snow or a spider web.

Changes are taking place in the new swamp biome, which allows players not only to explore a new location but also to receive various useful blocks. Also in Minecraft 1.19.10.23, you can try growing mangroves or creating processed wood from these plants.

When moving underground, players should be extremely careful, because this mob is getting stronger with each update.