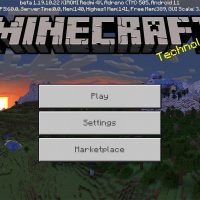 Download Minecraft PE 1.19.10.22 Wild Update with a working Xbox Live: evaluate the changes in graphics and gameplay and be careful, because Warden has become even more dangerous.

A lot of new and very useful changes have been prepared by the developers of Mojang Studios. Minecraft PE 1.19.10.22 continues to develop features in spectator mode, in which players will not cause a raid when visiting a village, even if they have a Bad Omen effect.

Also, the heroes can continue exploring Mangrove swamps. Where not only residents have appeared, but it is also possible to propagate tree sprouts and plant berry bushes.

Many different creatures in the cube world can be useful and dangerous for players in different ways. And, of course, developers always try to change their capabilities and skills to make the gameplay even more interesting and exciting.

In Minecraft 1.19.10.22, the capabilities of the Warden are expanding. Now this creature can appear on various unfilled blocks, for example, on red dust or snow. This will naturally complicate the survival process and it will be more difficult to avoid an unpleasant enemy.

By the way, such a spell as Protection will no longer work on the monster and will not save the hero from the threat. Also, Warden, as well as Allay, will remember data about the vibrations to which they reacted.

New features have been added to the behavior of Villagers and Wandering Traders, now they will flee if they see Zoglins.

The developers have made some changes to the graphical component of Minecraft PE 1.19.10.22. Thus, eliminating the error that caused the terrain to flicker during fog. And also transitions between biomes will be smoother and more realistic.

In Minecraft 1.19.10.22, an error was fixed due to which, if the hero died in the water, his hitbox was not thrown out. Also, the bonfire shower now has the correct tag and therefore the custom recipes will work correctly.
By the way, players will be able to use mangrove, crimson and curved boards to repair tools made of wood. And if the user decides to melt gold or iron tools into ingots, it will be rewarded.