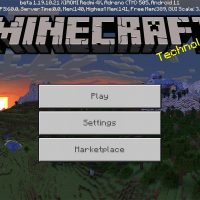 Download Minecraft PE 1.19.10.21 Wild Update with a working Xbox Live: take advantage of the new summoning eggs, as well as meet new residents of the swamps.

Again, the developers of Mojang Studios pleasantly surprised all users with the appearance of a fairly large update that affected almost all aspects of the game from the new spectator mode and improved gameplay to the appearance of residents of mangrove swamps.

This biome in recent versions is getting more and more attention in Minecraft PE 1.19.10.21. Also, the appearance of a new touch control cannot but please. It is thanks to him that players can jump non-stop, for this it is only necessary to constantly hold the jump button.

This will help to descend freely from the very top of the scaffolding.

In Minecraft 1.19.10.21, many mobs have received new features and capabilities. First of all, the Warden can now move through lava and water. Also, this creature will increase its rage with each attack.

Also in this version, players will be able to see that tadpoles turn into different animals in different biomes. In Deep Dark, it will be a Cold Frog, and at Stony Peak and Meadow– Temperate.

Also fixed the loss of goat horns when these animals attack mangroves. Players entering the Inventory will be able to see the new summoning egg that Trader Llama received. By the way, the name of this animal will now be displayed correctly.

This function, which appeared earlier, is getting more and more innovations and interesting features. In Minecraft PE 1.19.10.21, players will be able to breathe both on land and underwater. Also, the sleep rule will not affect the viewer.

This will happen when the player switches to this mode and the sleep timer stop notifying him. It is worth noting that the viewer will not make footsteps, splashes of water, and others when moving.

It is worth noting that being in observer mode will not reduce the hunger level of the player.