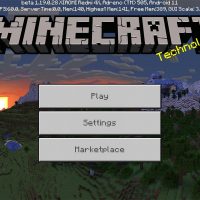 Download Minecraft PE 1.19.0.28 with a working Xbox Live: explore Mangrove Swamps, try to plant something on them, and beware of The Warden.

In the new version of Minecraft PE 1.19.0.28 The Wild Update, the developers of Mojang Studios tried to fix a lot of small bugs that caused inconvenience to the player.

When interacting with Allay, there is now a popup hint: Give the item away. Several changes also affected the sound side of the gameplay.

For example, a new soundtrack has been added and frogs have received more different sounds.

And most importantly, in the chests of the Ancient City, players will finally be able to find fragments of the echo.

This new biome has recently appeared in the game, so the developers are trying to make as many changes to its appearance and functionality as possible.

In Minecraft 1.19.0.28, it will be possible to place plants and seedlings in this area, as well as use the sprouts of mangrove trees for composting.

By the way, now the roots of these trees will be generated even through a layer of snow.

This long-awaited mob gets all new features in almost every update. In Minecraft PE 1.19.0.28 The Wild Update, he has a new type of attack called Sonic Boom.

It is dangerous because it throws off the victim and is used by Warden in ranged combat. By the way, now this aggressive creature will be angry at anyone who touches it.

And considering that now any mob can push him, the creepy monster becomes even more dangerous.

All objects built of clay bricks now have a more regular shape in Minecraft 1.19.0.28 The Wild Update. Illagers can now move between settlements and stay in them.

The developers have strengthened the structure of the deep shale in such a way that the center of the Ancient City formed a rectangle of the correct shape.