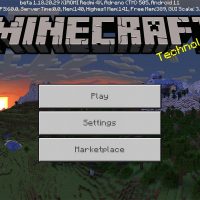 The Mojang team never stops to amaze fans of the blocky world by adding new details to the game. At the same time, they manage to fit changes into the familiar game world.

In Minecraft 1.18.20.29 there are several variants of mountain biomes at once. There are among them those that mainly consist of snow and ice, for example, High peaks. In such places, there is practically no flora and fauna, because the climate is too cold.

There are territories where goats can live, for example, Stony peaks. The biome consists of gravel and stone. There are Mountain meadows rich in plants and berries since this is the lowest biome of this group.

If we consider the caves of Minecraft PE 1.18.20.29, Lush caves are of interest here. They sometimes form underground reservoirs called aquifers. In addition, rifts appeared – deep and narrow canyons.

The developers managed to perfectly complement the existing caves with new ones so that they look harmonious.

Among the blocks in Minecraft 1.18.20.29, you can get an amazing frog light. The block can be obtained with the help of a frog. But first, you have to give her a magma block and wait for her to eat it.

The developers of Mojang have worked on the damage, from now on it is calculated more accurately, and the damage from some mobs has changed. Previously, players noticed the dragon breath damage error. This bug has also been fixed.

There are additions concerning the movement of Minecraft PE 1.18.20.29 players. For example, while in creative mode, players can descend and climb stairs and other blocks without stopping.

By the way, now when returning to the world, Steve’s position will remain the same, even if he was in lava when he left the game.