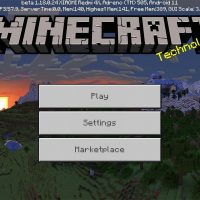 Finally, the developers have started the second part of the Mountain and Cave update. In Minecraft Bedrock Edition 1.18.0.24, you can find a large number of various interesting innovations. Various blocks, effects, and even new music appeared.

As previously mentioned, new music has appeared in Minecraft 1.18.0.24. At the same time, the number of new tracks is surprising. You can hear them all during survival in the ordinary world or the main menu of the game.

Additionally, a new music disc has appeared in the game. You can find it in the treasury or the corridors of the fortress. However, the chance of this is extremely small.

As you know, in Minecraft 1.18.0.24, there are new biomes in the caves. One such biome is Dark Deep. Here you can find completely new blocks, of which there are five in the game. First of all, it is worth noting the sculk sensor. This block is able to fix the player’s movement and, at the same time, give a redstone signal.

Additionally, it activates the sculk shrieker block. This block has patterns on the upper border of the block that resemble two souls. In this case, the shrieker block imposes the effect of darkness on the user.

With the release of Minecraft 1.18.0.24, the list of effects in the game has been replenished with the effect of darkness. It is similar to the effect of blindness in its properties, but it has a number of differences. For example, the blindness effect completely renders the player blind.

He cannot see anything around. And the darkness effect only limits the view. Thus, you should be more careful during the extraction of various resources since the number of traps and dangers has increased.