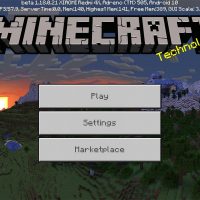 Developers from Mojang Studios have released Minecraft PE 1.18.0.21, the next release of the Cave and Mountain update. This time, the Swedish team has delighted the players with an abundance of new opportunities. For example, in Minecraft 1.18.0.21, the world generation system has been redesigned.

With the help of this chip, it was possible to create huge structures on the map: mountains, underground lakes, caves with vegetation, and much more. In addition, among the features of the new version of the Sandbox, one can note the increased height of the world, and both the upper and lower borders have been moved.

Minecraft update 1.18.0.21 began with the introduction of a new cute mob in the game – the axolotl – a friendly amphibian that lives in the warm waters of a cubic world.

The axolotl will not harm the player, even if he attacks him, however, he behaves completely differently when meeting with luminous octopuses, underwater temple guards, and drowned people. For this reason, you can take axolotls with you to make it easier to clear such dungeons in Minecraft PE 1.18.0.21.

Another feature of Minecraft 1.18.0.21 is the improved world generation. Earlier in the game, you could see a fairly common bug: there could be mountains with snowy peaks in the middle of the jungle or savannah. However, the new version was able to correct this moment, and at the same time, introduced another biome, which will be interesting to conquer and study.

Another important change in the entire update for Minecraft 1.18.0.21 Caves and Mountains is the change in the graphics engine. The game now uses Render Dragon.

In fact, for the players, all the changes will be to improve optimization, increase frames per second. However, the developers of Minecraft PE 1.18.0.21 themselves will have much more scope for improving the appearance of the cube world.