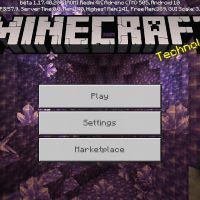 Download Minecraft PE 1.17.40.20 for Android with Xbox Live: explore the surroundings at a distance, get new glowing material!

Developers from Mojang Studios have released the next version of the Caves & Cliffs update. This update should eventually completely change the caves to make them much more interesting to stay in Minecraft Bedrock 1.17.40.20.

With the release of Minecraft 1.17.40.20, the developers have added a new Render Dragon graphics engine to the game. With its help, it will be possible to implement ray tracing on some smartphones in the future.

Also, the game has a new biome – Stony Peaks. It looks like snow-capped peaks, but instead of the usual snow blocks, the player will see there a large number of stones and gravel.

First of all, it is worth noting the global changes in the generation of Minecraft 1.17.40.20. The transitions between different biomes have become smoother. The generation of mountains has also changed, which made them more realistic. Previously, they resembled at most some kind of hills.

Amethyst geodes deserve special attention. Basically, this structure can only be found underground. It is a ball consisting of several layers: inner, middle, and outer. The most interesting thing is in the inner layer of the amethyst geode in Minecraft 1.17.40.20. When walking on amethyst blocks, the user can hear quite pleasant sounds made by these blocks.

Candles are another interesting innovation in Minecraft 1.17.40.20. This is a new light source. To craft a candle, the player needs to use a thread and a honeycomb. Honeycombs can be obtained with scissors. To do this, they need to be used on the bee’s nest.

Be careful, however, as the bees will try to defend their hideout. In this case, an excellent solution would be to install a fire under the nest. This way, the bees will not attack the player.

This item in Minecraft 1.17.40.20 was a great innovation for travelers. The spyglass allows you to observe what is happening at a great distance. To craft this item, the player requires copper ingots and an amethyst shard.

Copper can be mined by smelting copper ore. It is also worth noting that this item has a unique usage animation. However, to see it, you need to play in third-person mode.