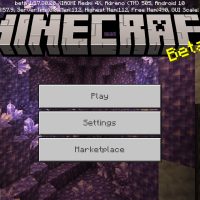 Download Minecraft 1.17.30.20 for Android with a working Xbox Live: use a telescope, tame axolotls, explore underground caves with a new generation of monsters, and much more!

The Mojang Studios team has finally released a new version of the Mountain and Cave update Minecraft 1.17.30.20. In this update, new types of caves, objects, and even mobs will become available to players.

In Minecraft PE 1.17.30.20, the developers added many elements from the Caves & Cliffs update, including axolotls, updated mob generation, and a spyglass.

In Minecraft 1.17.30.20, a new type of friendly mob has appeared that will dwell in an overgrown cave and help the player with all their might. Axolotl will be a faithful assistant during an underwater battle, as it allows you to restore health. It is also worth noting that the axolotl in Minecraft Bedrock Edition 1.17.30.20 is the mob that, despite its friendliness, will attack some monsters.

These include the guards of the underwater temple, as well as the drowned. Axolotls can be stored in a bucket and transported over long distances. Also, this mob comes in five different variations: leucistic, wild, blue, gold, cyan.

The development team also added a telescope to Minecraft 1.17.30.20. It can be used to inspect the surroundings in advance for the presence of enemies. Crafting a telescope requires amethyst shards and a copper ingot.

Also, the spyglass is ideal for those Minecraft PE 1.17.30.20 players exploring the world of the game. This item allows you to enlarge the image several times, thereby seeing in detail everything that is literally beyond the horizon of drawing.

Among the mineral veins in Minecraft PE 1.17.30.20, the player can often find a new block – tuff. This block does not have any special functionality. Therefore, it is used only for decorative purposes. You can get it with any pickaxe.