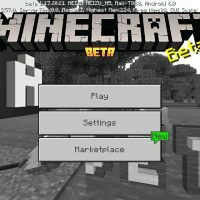 Download Minecraft 1.17.20.21 for android with a working Xbox Live: mine tuff and deep shale, learn the technique of mining melting ores, create a candle.

Among the features presented, in Minecraft PE 1.17.20.21, an update of the script engine can be distinguished. The developers have tried to do everything possible to improve the technical component of the game and all its elements.

In addition, a huge number of new items have been added from the global update of Mountains and Caves. In particular biomes, mobs, crafting recipes. For example, the contents of the rooms were replenished with a variety of vegetation: azalea, glowing lichen, berries, moss.

One of the new blocks of Minecraft 1.17.20.21. You can get tuff with a pickaxe, since other tools only waste the player’s time and resources.

It is worth noting that if you are lucky enough to find tuff, then rest assured that there are also diamonds somewhere nearby. Moreover, the rule applies to all valuable resources: from iron to gold.

Decorative items that are used for lighting. In Minecraft 1.17.20.21, the candle recipe consists of only two ingredients: a honeycomb and a thread.

At the moment, there are about 17 variations in the color of the candle. You can get each of them thanks to natural dyes. It is noteworthy that a candle can be placed on a cake and lit with a flint.

The developers have fixed the structure of the caves, which is why a new technique for mining melting ores has appeared in Minecraft PE 1.17.20.21. These include gold, copper, iron.

The system is almost identical to how deep shale is mined. However, this time, when firing, not blocks are obtained, but full-fledged ingots. Such innovation allows you to save inventory space because grains of ore take up the minimum number of user cells.

Glowing lichen is a plant that gives off a bright light. In Minecraft 1.17.20.21, vines can spread to neighboring blocks if they have previously come into contact with bone meal. Getting lichen is pretty easy, just use an ax.