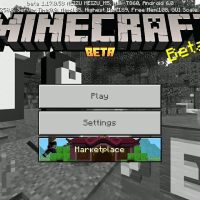 Download Minecraft PE 1.17.0.58 for Android with a working Xbox Live: use the usual elements of the game to create new items, master the technique of mining blocks, explore caves with their fragile clusters, and tuff!

The MCPE 1.17.0.58 version will delight many users, as it adds several remarkable moments to the gameplay. First of all, the developers have fixed the mistakes of the previous add-ons, so you can play freely without fear of being knocked out of the map at some point.

Many blocks have got textures that are much more elaborate and colorful. New items began to be generated in the vastness of the world.

A special feature of the new technology is the fast and efficient mining of ores in Minecraft 1.17.0.58. That is, players, save not only inventory space, but also their time.

Indeed, now, instead of the usual blocks that occupy most of the spaces, small drops will fall out. The innovation concerns, first of all, those blocks that lend themselves to remelting. That is, gold, copper, and iron. And this, it is worth noting, is one of the most important ores in Minecraft PE 1.17.0.58.

Crafting a pipe in Minecraft 1.17.0.58 is as follows: one cluster shard and several copper ingots. Using an item in the game is extremely effective, since it allows you to explore the area, practically without treading on it.

The player can look far beyond the horizon from another point on the map and see all the elements as they really are! Using a telescope also has an effect similar to wearing a carved pumpkin.

Amethysts are generated in Minecraft PE 1.17.0.58 only in caves. These crystals are an integral part and occupy most of the rooms. If the player suddenly needs a cluster, then it will not be possible to get it.

After all, interaction with amethyst causes only the earliest possible breakdown of the block and not its loss as an item. Using mechanisms can also break an object, even faster than using tools.

The only use of tuff in Minecraft 1.17.0.58 at the moment is one thing – decorating buildings.

You can break tuff with any existing tool, but you need a pickaxe for extraction.