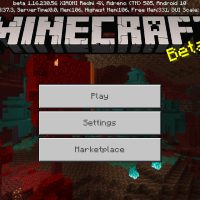 You will be delighted by the released version of MCPE 1.16.230.56’s abundance of various changes: characters, blocks, craft, possibilities, fixes.

This is a new generation, especially in caves and mountains. In this way, users can enjoy the mountain and cave additions’ features, meet new mobs, and play with them.

These peaceful creatures are found exclusively in the water in Minecraft PE 1.16.230.56. If the character leaves the water, it will immediately suffer fatal damage and die. When in the water, the player can be surrounded by a crowd of enemies, such as drowned people.

In that case, nice axolotls will come to your aid. The mobs will try to shield the player from enemy attacks. Besides, axolotls can apply a regenerative effect and remove fatigue.

In MCPE 1.16.230.56, deepslate is identical to stone: both blocks have a similar texture and strong properties. In the beginning, it is not an entire block but a fragmented version. To obtain shale as a solid object, fragments must be burned in an oven.

Deepslate is generated only in the upper world, so it is unlikely to be a block in infernal biomes.

Most commonly found in Minecraft PE 1.16.230.56 caves. The plant is bright, especially if it is in the pitch dark – then light will shine from its vines. Notably, lichen can attach to blocks on all sides: on the bottom, the sides, and the top.

The use of bone meal facilitates the spread of lichen to the adjacent block, if there is one nearby. Otherwise, the player will waste the item. The only way to extract the plant is to use scissors.

Glow berries are one of the user’s food options in Minecraft 1.16.230.56. The natural place this plant generates is in a lush cave, one of the new biomes of the version. The berries can be fed to foxes to get them to breed. It should be noted that one vine can yield up to five berries at a time.