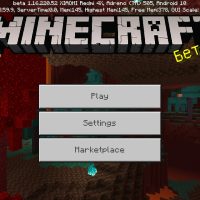 In Minecraft version 1.16.220.52, the Mojang Studios developers have added more planned innovations from Caves & Cliffs. In addition, the height of the world has been increased and bugs have been fixed.

The most important innovation in Minecraft 1.16.220.52 is the mountain update. From now on, five new biomes appear in them. Also, the developers had to raise the height of the world to 320 blocks. By the way, it is in these previously unseen mountain that goat biomes live.

In the mountains of Minecraft 1.16.220.52, you can also find powder snow, which draws players into itself. For this reason, exploring mountain biomes without leather gear is highly discouraged. Otherwise, you could get stuck in snow blocks and die from hypothermia.

Mojang Studios has added copper blocks to Minecraft 1.16.220.52. The ore of this metal can be mined at the same height in the world where iron is generated. Then the resulting blocks should be smelted in a furnace to obtain ingots.

Copper ingots are used to create copper blocks that oxidize over time in the environment. To suspend this process in Minecraft 1.16.220.52, you need to combine the copper with honeycomb.

In Minecraft 1.16.220.52, the glowing squids, which were removed some time ago, have returned. These creatures live in the deep ocean and are capable of emitting light around them.

What’s more, the new squids are the source of luminous ink pouches. With their help, in Minecraft 1.16.220.52, you can create a special frame that illuminates objects. Also, this ink is useful for illuminating the text on signs.

In Minecraft 1.16.220.52, the lightning rod is designed to protect any buildings from lightning strikes. This item is crafted on a workbench from three copper ingots.

It’s quite simple. Further, the lightning rod must be placed on the roof of any building that needs to be protected from fire.

Players remember the cave blocks from the announcement of Minecraft PE 1.16.220.52. And indeed, everything appeared at once: amethyst, dripleaf, moss and, of course, enchanting azaleas and several others.