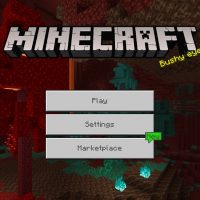 Mojang Studios keeps working hard on the Nether Update. Hoglins, Piglins, new spooky and cozy biomes, and netherite were not enough, as we can tell.

It turns out developers introduced some more new content to make Minecraft PE 1.16.201 even more exciting and thrilling to play.

First of all, a fluffy and cheeky animal appeared in snowy mountains where it lives in groups of three-four species in each. This mob is a goat.

It is a neutral creature one cannot tame, though it might seem to be livestock. Goats act quite bizarre in MCPE 1.16.201: they do not attack players and other living beings, but sometimes they butt.

It seems that goats like being alone and have peace and tranquility. Therefore if you do not want to be butted by the impudent goats, simply do not come near them.

Furthermore, Minecraft PE 1.16.201 players can milk mountain goats to get rid of some annoying effects applied to you.

Besides, billies jump high enough to survive and live comfortably in such a severe biome like mountains. They even avoid powder snow block since bucks now what it does.

On the other hand, Minecraft Bedrock Edition 1.16.201 additionally features another unique block generating exclusively in the mountains biome.

Notwithstanding the statement above, you cannot grab powder snow using your shovel or anything else but a bucket.

Besides, if one places a cauldron outside when it snows, one will soon get powder snow in buckets, meaning there is no need to visit cold and wild mounts.

Minecraft PE 1.16.201 has the freezing effect, denoting unwary players and some mobs can die in powder snow if they stay there for too long.

However, there’s always a solution to any gruesome problem one comes across. Leather armor produces enough warmth to keep you alive.